New Drug for Treatment of Atherosclerosis 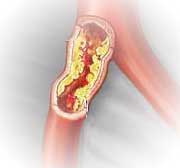 Technology: Prevention and treatment of atherosclerosis are based on decreasing the total cholesterol (TC) and low density lipoprotein (LDL) concentrations in the patient's blood.

One of the ways to achieve this effect is increasing hepatic cholesterol excretion mainly in the form of bile acid. Suggested drug is a world first chemical compound for direct stimulation of cholesterol excretion from liver with bile and excrement. All the existing medicines for stimulation of cholesterol excretion act indirectly in the intestines by feedback regulatory mechanism.
It is known that the thyroid hormone triiodothyronine (T3) plays an important role in cholesterol metabolism. There are two additional derivatives of T3 with the similar properties that can be synthesized. The stimulation of cholesterol (bile acid) excretion is one of the main mechanisms of this process. In addition, T3 increases HDL and inhibits cholesterol and LDL synthesis in liver. These effects also impede the development of atherosclerosis. However, T3 administration in doses necessary for achievement of these results causes hyperthyroidism with may cause serious heart injury.
The team of researchers synthesized a new derivate of T3 that retains its effect for increasing the cholesterol elimination in liver with bile but has no toxicity.
Results: The required agent was synthesized in the form of a yellowish powder sparingly soluble in water. The proposed structure of the compound was validated by physical and chemical methods. Its effectiveness in stimulating cholesterol excretion and the absence of thyrotoxic effects were attested by laboratory experiments with white mice. The proposed product is patentable; a patent application has been prepared.
There are all reasons to believe that a drug, like T3, will have a combined effect: it will increase the HDL level in blood and enhance cholesterol excretion in bile and feces, as well as inhibit cholesterol and LDL synthesis in liver.
The agent prototype received the Bronze Medal and Diploma at IENA 2002, International Exhibition "Ideas-Invention�New Products" in Nurnberg, Germany.
The Company is looking for investment for the intermediate stages of the project. For contact click here.